The man in the fedora is back for a brand new graphic adventure! Several years after having discovered Atlantis, Jonesy finds himself tricked into investigating the mythical Seven Cities of gold. When there's a conspiracy at work, will he be able to stay on top of the situation? On his way, he'll come across lost temples, deep jungles and buried cities. Will our hero succeed where the Spanish conquistadores failed? He's full of wits and he's not afraid to use his fists. But the promise of infinite gold — and maybe more — will put many foes on his tail, living... or dead. The reward goes beyond imagination, but beware of nazis and deadly traps, doctor! 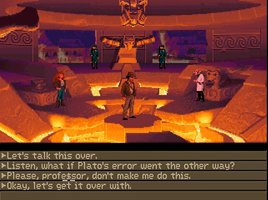 If you're missing the classics from the golden era of point-n'-click adventure games, then Raiders of the Seven Cities of Gold is made for you! Were you ever sad that Indiana Jones and the Fate of Atlantis never got a sequel? Did you love the humour of Monkey Island or simply the puzzles of Day of the Tentacle? Then support us and together let's make this project happen! Raiders of the Seven Cities of Gold will be an old-school game. Big pixels on the menu!

We are a small group of point-n'-click enthusiasts, gravitating around the Adventure Game Studio community. The original founder of the project was American, and now there's a Frenchman, a German, a Greek, an Italian... The more the merrier!

WHEN WILL IT BE RELEASED?

Ever heard of the amazing fan freeware game "The Fountain of Youth"? It's been in development for 15 years. It drove the fans crazy. They said it would never be released. Well, the team took their time, went through a reboot, changed the game engine, and never gave up. "It's ready when it's ready!", they kept saying. And now, they're very close to be releasing a game with very high quality standard — for free! We believe their approach is the right one. See you in 15 years! ;-)

Of course, we're not that cruel! To give you a taste of what's ahead, you can enjoy some mini games. Download them from the home page!

Demos on the home page 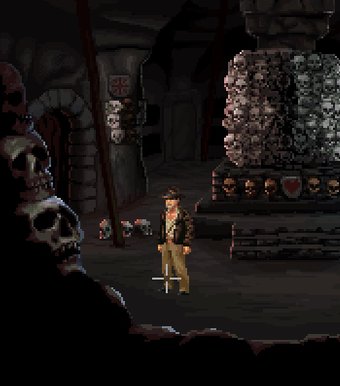